Two French journalists were reported to have been killed in Mali after an apparent abduction by militants.  Claude Verlon and Ghislaine Dupont, journalists working for the RFI radio station, were abducted in the northeast town of Kidal after interviewing a local political leader.  French authorities confirmed and condemned the attack.  The abduction comes after France had announced earlier this week that hostages taken in Niger in 2010 by Al Qaeda in the Islamic Maghreb (AQIM) had been released.  Reports regarding the negotiations that led to the release of those hostages suggested a ransom had been paid.

The reported nature of the attack provides an eye toward the level of government control in Mali at current.  Reports say that the pair were forced into a truck and promptly driven off into the desert.  While the Malian government has been able to stablize the situation in population centers to a degree, the bulk of the country remains largely outside their oversight.  French and African forces operating the country as part of the United Nations Multidimensional Integrated Stabilization Mission in Mali (MINUSMA) have been trying to rectify this, but they too have been largely limited to population centers and so-called lines of communication (mainly Mali’s limited road network). Some reports suggested that security forces followed the abductors in hot pursuit. 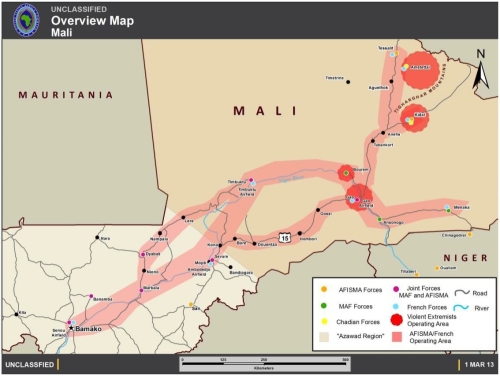 US Africa Command (AFRICOM) had previously released a map of the state of affairs in Mali as of March of this year, showing the operating areas of French and the African-led International Support Mission to Mali (AFISMA).  The map clearly showed the area of operations to be very limited and directly linked to the country’s road network.  The US supported and possibly continues to support the UN-backed operation as part of the US Operation Juniper Micron.