Today there have been reports of two important developments on the matter of individuals detained followed a reported coup in South Sudan this past December.  Seven of the eleven individuals arrested, who have come to be known as the “Garang Boys” for their connection to national hero John Garang, were released and deported to Kenya.  South Sudan, however, said it would proceed with a trial against the remaining four individuals, along with three others not currently in custody.  Notably among those individuals is former Vice President Riek Machar. 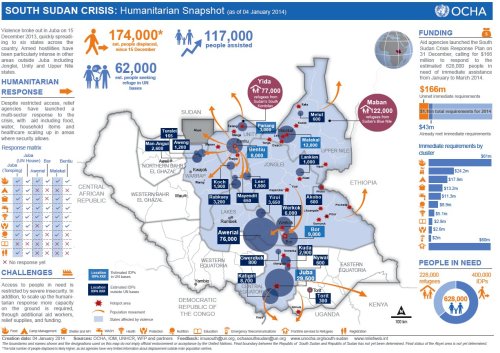 UN Office for the Coordination of Humanitarian Affairs Snapshot of the South Sudan Crisis, as of 4 January 2014

Machar, who has become the defacto leadership figure for the rebellion that has followed the coup attempt and arrest of the Garang Boys, had said that the release of all of the detainees was required for negotiations on a peaceful resoltuion of the current crisis.  This was echoed by the delegation representing the rebels at talks held in Ethiopia, arranged by the east African economic organization, the Intergovernmental Authority on Development (IGAD).  Some IGAD members have also called for the release of the detainees, a demand which the South Sudanese government has staunchly refused to acquiesce to.  Kenya’s President Uhuru Kenyatta, who appeared with the detainees sent to his country, said he and other regional leaders would continue to press for the release of the rest of the detainees.

Peace and reconciliation may continue to elude South Sudan with these announcements, however.  While both sides continue to say they are committed to the ceasefire agreed to at the IGAD sponsored talks, Taban Deng, the head of the delegation representing the rebels who signed that agreement on their behalf is among those sought for trial.  In addition to the continued pursuit of these treason charges, Ugandan forces, who intervened on behalf of the South Sudanese government, remain in the country.  Their presence has become a divisive issue, both among the parties to the conflict and among other east African leaders.  Uganda is a key member of IGAD.

All of this also comes as the United Nations reports almost half a million people to be displaced in the country, including almost eighty thousand sheltering in or around facilities operated by the UN Mission in the Republic of South Sudan (UNMISS).  The UN says it needs over $200 million to meet immediate humanitarian needs through March, but had only received a little over $100 million as of January 13th.  The UN has described the current situation in the country as “fragile.”