It was reported today that attempts to disarm nominally Christian militias in Central African Republic, broadly referred to as anti-balaka, had been met with resistance.  Unsurprisingly, the anti-balaka militiamen reportedly did not wish to be disarmed by force by international peacekeepers and also demanded that efforts be made to disarm former members of the nominally Muslim Seleka rebel group. 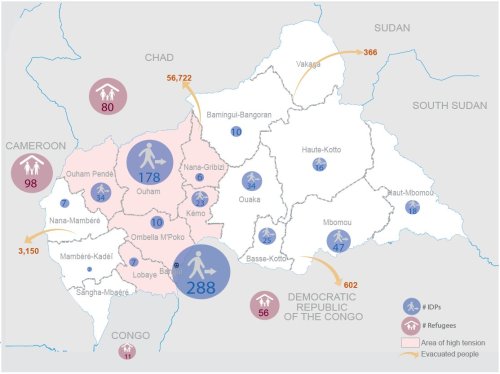 Map showing numbers of IDPs (in thousands) by state in CAR, refugees in neighboring countries (in thousands), along with highlighting of areas of significant tensions, from OCHA’s Humanitarian Snapshot, dated 10 February 2014.

Seleka rebels ousted President Francois Bozize last March, taking control and touching off a cycle of inter-communal violence in the country.  The anti-balaka militias had come into existence initially to provide a measure of self-defense against ex-Seleka rebels, who operated with virtual impunity under the administration of Interim President Michel Djotodia, who had led the group.  Djotodia resigned and fled into exile last month, and since then the anti-balaka militias have exacted brutal reprisals on those they accuse of being rebels or otherwise associating with them.

International peacekeepers have found themselves strained to adequately protect civilians caught in the current crisis, and there have been accusations of complicity with armed groups, notably with regards to Chad.  Government security forces have also been accused of complicity and the International Criminal Court has opened a preliminary examination into possible crimes against humanity and war crimes committed in the country.

In response to the continuing violence, France announced yesterday that it will send an additional four hundred personnel to CAR, bringing the total size of its contingent to two thousand individuals.  France’s intervention, codenamed Operation Sangaris, began last December.  The European Union also announced yesterday that it is now planning to send one thousand troops to CAR, doubling its original commitment.

There remain concerns that the additional forces will still not be enough to contain the violence.  The United Nations’ Secretary General, Ban Ki-Moon, said that “the United Nations and its regional partners face an urgent test” in CAR.  Secretary General Ban called on the international community to continue to work to end the crisis.  There remain few accurate estimates of the current death toll, but hundreds of thousands have been displaced internally and are in need of humanitarian assistance.  Some two-hundred and fifty thousand have also fled to neighboring countries.