Yesterday, East African heads of state announced their decision to deploy an international force to South Sudan starting April in an attempt to stem the conflict there. Troops will reportedly come from Burundi, Ethiopia, Kenya, and Rwanda, all of whom are frequent particpiants in other African peacekeeping operations. Djibouti, which also participates in peacekeeping operations on the continent, may also contribute forces to this new mission. Ugandan troops, who intervened on behalf of the South Sudanese government in January, have said they will withdraw after the new force is deployed. 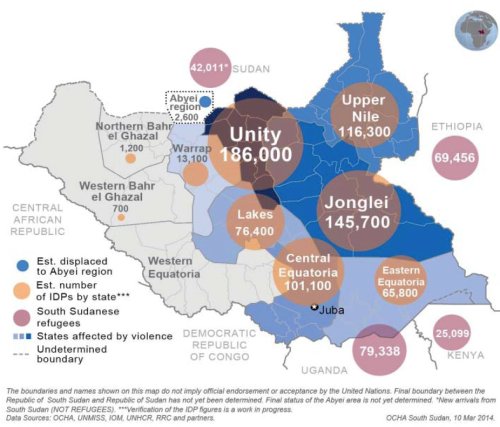 The force will operate under a mandate from the the Intergovernmental Authority on Development (IGAD), an East African economic bloc, which has been mediating talks in Ethiopia’s capital Addis Ababa to try and bring an end to South Sudan’s crisis. The crisis erupted last December following a reported coup attempt. The government subsequently implicated a number of opposition political figures, most notably Riek Machar, as having been behind the attempted overthrow. Riek Machar announced a formal “resistance movement” in February and the country is effectively in a state of civil war.

The IGAD-sponsored talks did produce a ceasefire agreement in January, but this has been repeatedly violated. A second phase of talks to find a lasting political solution to the crisis has stalled. One of the main rebel demands is the release of individuals detained in connection with the coup. South Sudan is proceeding with their treason charges against eleven individuals, and a court has demanded that four individuals previously released and deported to Kenya return to face the indictments.

South Sudan has also accused the UN mission in the country, UNMISS, of collaborating with rebel forces. Last week, South Sudanese forces seized weapons and ammunition from a UN convoy, which UNMISS said had mistakenly been loaded in with humanitarian supplies. UNMISS also denied that landmines were among the munitions and has called on the South Sudanese government to respect their personnel and existing agreements. UNMISS is providing humanitarian assistance and shelter to hundreds of thousands of internally displaced persons. The UN also estimates that millions in the country are in need of humanitarian assistance.