New pages on US intelligence gathering operations in Africa

One of the things that really got me started on this was collecting information about US intelligence gathering operations in Africa.  Its said that in any conflict you can never have too much intelligence and that you probably don’t have as much as you want.  This is especially true in Africa where many governments do not have a clear picture of what is going on in much of their country or where their borders even are.  Simply mapping things out has been an important task, which the US has assisted in.  For instance, the US used a sensor package called BuckEye, designed to collect geospatial intelligence, to map 6,000 square kilometers of Burkina Faso in 2012.  The US has also worked to provide high resolution satellite imagery of Africa to its partners for these purposes. 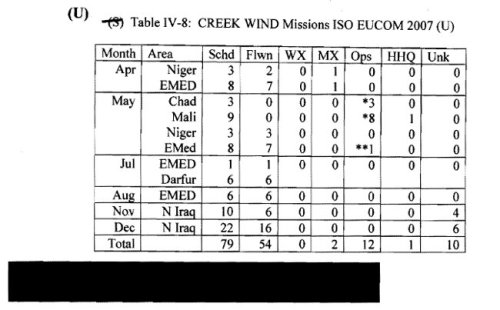 Table IV-8: CREEK WIND Missions ISO EUCOM 2007 (U) from the 2007 Air Combat Command History. The definitions of the asterisks have been redacted.

With many ongoing efforts on the continent, more traditional intelligence support to active operations is also important.  Codebook: Africa now provides summaries for nine recent named intelligence gathering missions in support of efforts in Africa.  You can find these here.  Available information varies, but a lot has been gleaned through freedom of information act requests and scrutinizing various government resources, such as the table above from the 2007 Air Combat Command history.

Yesterday, the French announced that Thierry Dol, Daniel Larribe, Pierre Legrand, and Marc Feret, employees of the French nuclear company Areva who had been taken by Al Qaeda in the Islamic Maghreb (AQIM) on 16 September 2010 at a uranium mine near Arlit in Niger, had been released.  French Foreign Minister Laurent Fabius flew back to Paris from Niamey with the hostages today, where they were greeted by French President Francois Hollande, who then made some remarks.  President Hollande did mention that France is still working on the release of at least seven other hostages, including three in North Africa.

When it was announced on Tuesday, France’s Defense Minister Jean-Yves Le Drian said that the release had been secured without the use of military force and without the payment of a ransom.  However, AFP subsequently reported that a ransom of 20 million euros, drawn from a secret intelligence service fund, may have been paid.  French authorities deny this, but no significant details about the negotiations have been provided.  The original AFP wire note on this appears to be available only in French, but does not name the source of the information.

This release of French hostages comes well after the French made an abortive attempt to free DGSE agent Denis Allex in January.  The rescue operation, conducted with US support, failed to free Allex, who was either killed during the operation or by his captors afterwards.  A major embarrassment for the French government, the experience in January may have played a role in the handling of this situation.

Operation Observant Compass in the News

A version of this post appeared first on GlobalSecurity.org’s blog Frantic Goat.

Yesterday, the Washington Post published a good article on the unreported US mission to support efforts to support a number of African partners neutralize the threat of the Lord’s Resistance Army (LRA) and its leader Joseph Kony. Though not mentioned in the Post’s piece, this operation is entitled Operation Observant Compass. The article does a good job pointing out the nuances of the effort, Codebook: Africa’s new profile and GlobalSecurity.org’s existing profile both provide important added granularity.

For instance, the request to deploy CV-22B aircraft, likely from assets recently deployed to Europe, is part of an ongoing effort by the US mission to expand the ability of regional forces to respond to new intelligence. Increased mobility and intelligence gathering capability is really what the US brings to the counter-LRA effort (abbreviated C-LRA). The CV-22B aircraft would provide an immediate response to capabilities the US is currently in the process of sourcing through the private sector. In July of this year, Request for Information for both dedicated rotary-wing and fixed-wing support were put out, and these just recently turned into active solicitations for bids. Being able to rapidly shuttle personnel and supplies between the forward operating locations supporting Observant Compass is critical to the effort, as is noted in the Post article.

This gets into another point not elaborated on in that article. The operating location in Obo, Central Africa Republic had been a critical element of the operation. While the article notes that CAR essentially became a no-go area after the coup earlier this year, what is left out is that CAR was home to the C-LRA Operations Fusion Center (COFC), and had been the center of gravity for US support to the effort. After the coup, the US looked to make a shift into Nzara in South Sudan, another known operating location for this mission. This was evidenced by the fact that on 1 May 2013, the US Army issued a solicitation for a contract to provide up to 140,000 liters per month of JET-A aviation fuel and associated refueling services for the support of C-145 or comparable aircraft at Nzara Landing Zone, Republic of South Sudan. The C-145 is the US designation, recently applied, to the Polish M-28 Skytruck, which have been part of US Special Operations Command’s Non-Standard Aviation fleet and which are currently among the few air assets available to the C-LRA effort.

Welcome to the newest source for information on US defense and security involvement in Africa, America’s Codebook: Africa.  Though America has a long standing history of engagement in Africa and this has significantly intensified since the events of September 11th, 2001, these activities remain largely obscure.  Building on work begun elsewhere, this site will look to track US operations and engagement so that individuals can become more informed about what is being done and stay that way.

More than just a glossary and news aggregator, Codebook; Africa seeks to provide brief, but informative summaries of critical pieces of the puzzle, all gleaned through diligent research of open sources.  What deep analysis Codebook: Africa seeks to do will be as objective as possible, leaving it to the informed reader to draw their own conclusions.